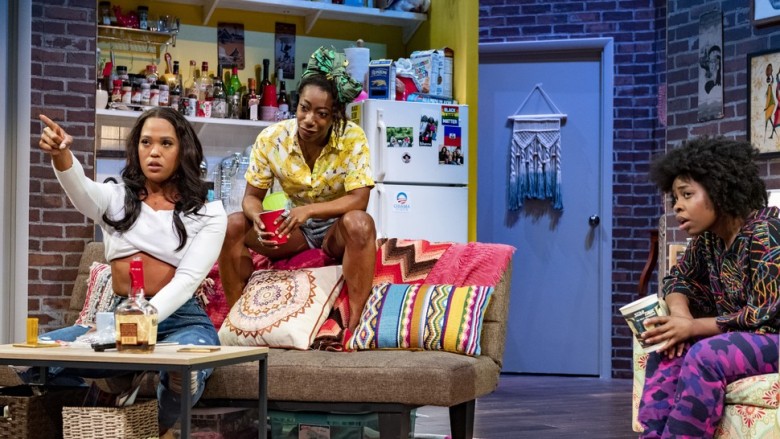 BLKS is a play that feels like the pilot of a sitcom. It has the rapid-fire joke density of Living Single and the sexual frankness of the smash hit film Girls Trip, with a refreshing, overdue embrace of queer characters. It’s the kind of play that makes you believe that media centering black women has pushed itself into a new era, with fresh spins on old stories and depictions of our interior lives that don’t begin and end with our relationships with men. The queerness of the play is key, and by marrying it with the raunchiness often reserved for straight narratives, BLKS transcends the rigid value sets often on display in black comedies. The story feels free in a way that injects hope into the intellectually diverse future of black narratives.

In BLKS, male characters are visitors. At no point do they overtake the story. The world created for us is focused on women and only related to men in terms of the way they disrupt the lives of the main characters. Roommates Octavia, Imani and June are all stunted in their emotional lives, in one way or another. Octavia (Paige Gilbert) doesn’t want to be exclusive with her frequent fuck buddy Ry (Coral Pena), but she wants all the emotional benefits that come from a real relationship. Imani (Alfie Fuller) is still getting over the death of her father, dwelling intensely on the last thing they watched together: Eddie Murphy’s notorious stand-up special Raw. June (Antoinette Crowe-Legacy) is beautiful, successful and could probably have any man she wants, but she’s stuck on her philanderous first love Jamal.

While the plot reads like the foundation for compelling drama, BLKS goes in a different direction. Given all their emotional stress, the women decide to put all their energy into a fun night at the club. They wrap their bodies and insecurities alike in sexy clothes with the desire to leave everything on the dance floor. Of course, life gets in the way of merriment as soon as they arrive and the ladies are forced to confront all the troubles they were trying to run away from.

The play is refreshingly casual about love, sex, and friendship in a way that mirrors the day-to-day minutia of being a black woman in the world. Playwright Aziza Barnes excels with natural dialogue, with much of the humor coming from casual observations. The drama never overtakes the bouncy tone, allowing its characters and viewers alike to laugh through the pain. The troubles that the characters suffer permeates the plot without overtaking it. June walks away from a violent altercation, but the experience never leaves her. Even as she tries to shrug it off, everyone–including a potential suitor (Chris Myers) she encounters–can feel her pain, even when she refuses to acknowledge it.

Octavia is the de facto lead, pulling the narrative along at high-speed with the self-assurance of a woman trying to make every moment count. She has a secret that I won’t reveal here, but suffice to say that tragedy and comedy collide in the most literal way possible. The worse things get, the more brash Octavia becomes. She drips with sexuality, instantly magnetic to every person she encounters, even when she’s clearly at her worst. But despite it all, her love story with Ry is affecting and by the end of the play, you want them to end up together.

Of all the characters, Imani is the toughest to pin down. She has the quiet confidence of a woman who makes friends easily but doesn’t want people to actually know her. Imani is eccentric at first, and then slowly she reveals her layers. Within the confines of a play, she still remains a bit of a mystery. She’s the sort of character television viewers would slowly get to know over a number of seasons. With Insecure doing well on HBO, maybe it’s time for television to re-embrace the black woman-centric sitcom. With Barnes at the helm, BLKS is ready for primetime.