Fishnet Cinema has only existed since mid-September and has a handful of writers, so it would have been impossible for us to cover all the films I wish we could have in 2016. However, I’m so glad this site is up-and-running and I’m so proud of all the content added so far! Most of the films on this list are films that have not been formally reviewed for the site. It hopefully won’t be that way for 2017.

Shamefully, the Fishnet staff didn’t get to see everything last year. Some key films we missed include: 20th Century Women, Certain Women, Miss Sloane, Equity, Denial, Toni Erdmann, Elle, Loving, Little Sister and Nocturnal Animals. They’re key films because they star women, and we should really be on top of that. Our apologies. Oh and, yes, we saw American Honey. No, it did not make this list. As always, lists like these are based on opinion. The merits of film can be largely subjective. This is a site that puts women’s stories first, so you know where our heads are at.

In no particular order:

It is often difficult to speak critically on pieces of media that changed your life. Often, you can only sing it’s praises without much evidence to back it up. A good critical review is more than love and praise, which is why I have been hesitant to write about Moonlight. I, like a lot of critics, am much better at writing thoughtfully about the pieces of media that I dislike, or fall short of what they could have been. That is definitely not the case with this film. It did everything I wanted it to do and more. As a queer person of color from a poor, troubled home this film spoke to me on the most personal level. In a year when I challenged myself not to see films with male protagonists, I’m so glad I made an exception for this one. The script, acting, cinematography and score are all top notch. This is a film that deserves every once of praise it’s getting.

Finally, a mainstream genre film with a female protagonist who acts like protagonist. Unlike his 2015 film Sicario, Denis Villeneuve allows the woman on the poster to actually do stuff this time, and the results are phenomenal. I don’t know if I’ve ever seen an alien invasion film this poetic in my life. It’s score is steady and beautiful. The performances are understated, yet strong. But what really won me over with this film was it’s message: Listen to each other. Strive to communicate and understand one another. Give people time to explain themselves. Try your best to approach others on equal footing, constantly in pursuit of common ground. Amy Adams plays a character whose patience, intelligence and understanding saves the world. That is inspiring.

I usually detest the term “strong female character” because it tends to bend towards the idea that strength in women on film has to be shown with brawn, violence and other “traditionally masculine” traits. The Strong Female Character often shoots guns, takes names, doesn’t have a love interest (because that would make her emotional), kicks men in the face, and STILL has time to look hot (in a Eurocentric way). It’s like men don’t know how to write an interesting female character unless she has a gun strapped to her waist, and I just find it to be a cop-out. To create a film like Moana, men have to trust that women are people and that a girl can be strong in a dress, unprepared, realistically flawed and out there on her own winging it and learning as she goes. With Moana, Disney did something I never thought it could pull off: They created a female character I could relate to. Moana is a film young brown girls have been waiting for.

It’s hard to talk about this film in terms of my interpretation when writer/director Anna Biller is so present on the internet and explicit about what her film is supposed to be. But, for me, it’s a film that turns a character that is often underwritten in media (“The Villainess”) and gives her an actual story. I’m sure having a woman telling the story has a great deal to do with that. The mysteriousness and inherent danger of women and femininity is myth perpetuated by male storytellers. With The Love Witch, Biller plays on this myth and reveals the misogyny within it. The way in which she kills men in the film serves as a critique of man’s objectification of women. It’s also stylish, funny, gorgeous to look at and a fully engaging cinematic experience. It really is a film that you need to see to believe, so do yourself a favor and watch it IMMEDIATELY. Films like this remind us of the full potential of art. 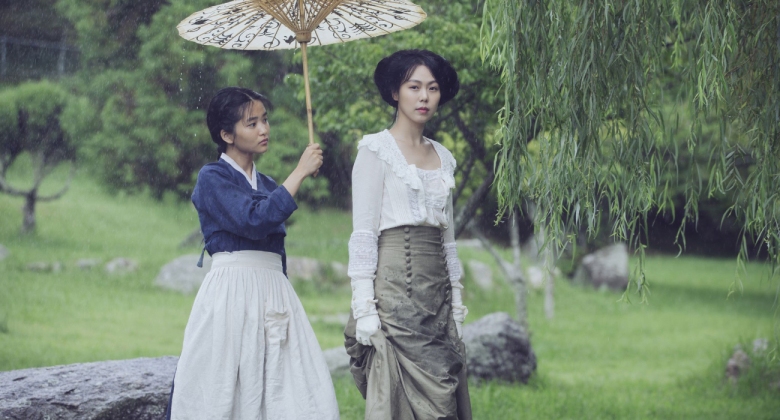 Be still my queer heart. I had no idea I had been waiting for a film like this until I saw it. 2015 threw us a big queer bone with Carol and 2016 had to up its game (especially with how shit the year was for marginalized folks in almost every other area) with The Handmaiden. It’s a twisting tale of love, betrayal, lust, abuse, greed, grief and so much more. It really serves as a takedown of humanity’s most unsavory tendencies, while raising up the most beautiful thing humanity has to offer: Love. This is a film that grabs you by the wrist, squeezes until you’re bruised, then lets you go with a complimentary ice pack. The main actresses are superb. The critique of masculinity is biting and truthful. The visual storytelling is mesmerizing. The sex is intense. What more could you want from a romantic thriller?

I wasn’t planning on including Zootopia this list until I noticed some people on the internet (including a cartoon critic on YouTube) calling the film “heavy handed” and “wrong” for trying to talk about prejudice in a nuanced way. As a black woman, I disagree. And I’m very tired of white men telling me and the rest of the world the “right way” to talk about racism. You guys aren’t actually the ones people need to be asking. The way this film is able to touch on the different layers of gender and racial discrimination is honestly impressive. Simplification in describing racism in the media is the reason why its 2016 and grown adults don’t know systematic racism is. Zootopia is a revelation. But beyond that: Ginnifer Goodwin is equal parts engaging and flawed performance as the film’s lead, Judy Hopps. Also, Jason Bateman gives one of his strongest performances as a CARTOON FOX, if you can believe it. A CARTOON FOX. 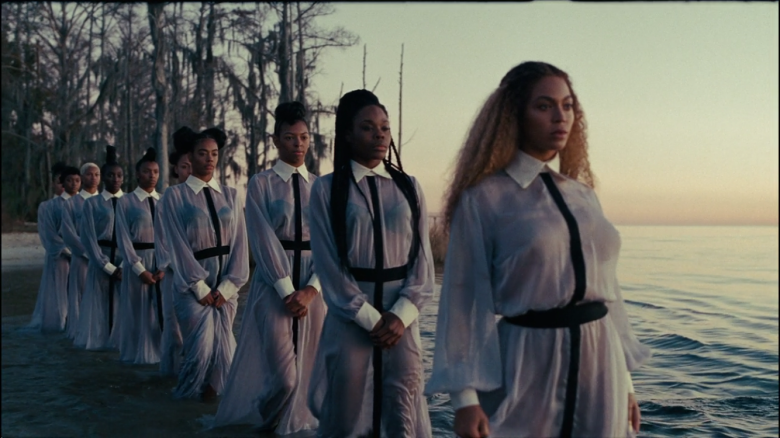 Oh yes, I did. Not since Eve’s Bayou have I seen such a beautiful depiction of Southern womanhood and blackness. Warsan Shire’s poetry threads the collection of music videos within this film subtly and with quiet beauty. Beyonce is… Beyonce. The cinematography is Oscar-worthy. The story- one of love, betrayal, history, misogyny, marginalization and eventually forgiveness-  is ageless and painfully relatable to the intended audience (see: black women). Here is hoping that it will inspire a new wave of cinema that centers black women, (and by extension women of color) and their stories, both truth and fiction. The music is fantastic, the performances are understated and powerful and the editing is top notch. There have been a million think pieces written about Lemonade already, so I’ll stop here.

There isn’t much of a tradition on film of black girls coming of age. Eve’s Bayou, Crooklyn, Just Another Girl on the I.R.T. and Girlhood are the only films that come to mind in that category. But now that I’ve seen The Fits I can confidently say that there never has been depiction of black girlhood this direct before. The Fits does more than put a young black girl in cultural context and let events mold and change her. Rather, it is meditation on the symbolic nature of the black woman and its important within the black community. The protagonist, Toni, is essentially trying to pass her initiation into black womanhood by way of getting accepted into a community center dance team. This is a singular journey and a rough one. At first, she tries to approach it with military-like training, but she quickly realized there is more to it than that. The film highlights the strength, magic and unconventionality of black womanhood. 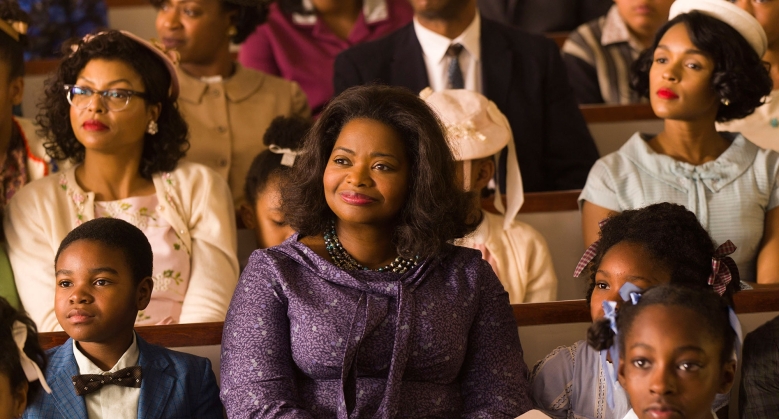 I tend not to watch films like Hidden Figures. Though these films tackle race and history, the story arcs and feel-good endings to these films usually cater to the feelings of white people. I do not believe these films should do that. This is not to say that I necessarily think that this film challenges white people; but I do think it leaves them with a lingering feeling of discomfort. And I love that. Racism is partially based in the concept that people of color are inferior to white people. Less civilized, less appealing, less intelligent. Hidden Figures is a film that brings white people face to face with the idea that black people could actually be smarter than them, and posits that it has always been possible.  Though there are white savior like figures in the film, ultimately the women save themselves with their own work ethic and intelligence. That was beautiful to see. Taraji P. Henson is an actress who has deserved her due for a while and I’m so glad this film (and I guess Empire) are finally giving it to her.

I want to scream it from the Heavens: INTERNALIZED MISOGYNY IS A THING. The Witch, whether intended or not, is a story about internalized misogyny and how it is used to prop up patriarchy. The mother is the villain of this film, and her insistence that her daughter Thomasin is evil with no evidence to back that up is heartbreakingly telling. Though I do not believe that Christianity itself is sexist, much of the community built around the religion has sexism built into their values whether it belongs there or not. The family baby is abducted by an unseen kidnapper at the beginning of the film and the rest is a story of mother-daughter abuse. The only person who stands up for Thomasin is her father, although his weakness of character is true reason behind most of the things Thomasin is blamed for. Though this film is a slavishly realistic period piece, the story is timely. It reminds us that a woman is often guilty by just being a woman, no matter how much we as society insist we’ve moved past that.

OTHER GREAT FILMS FROM 2016