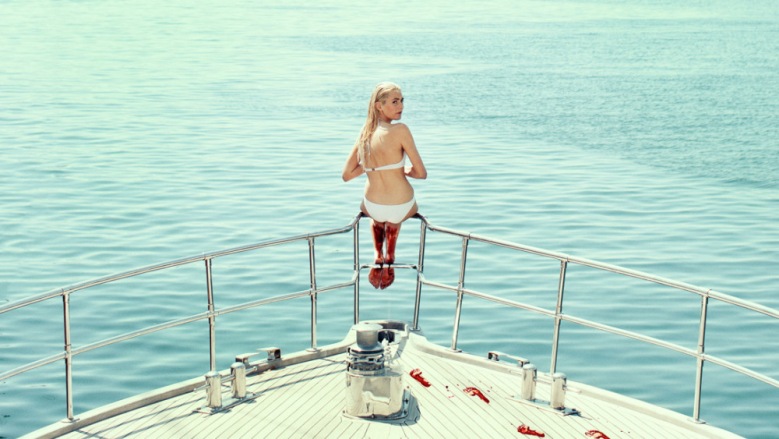 Early in Isabella Eklöf’s Holiday, there’s a crucial verbal exchange that masquerades as an innocuous meet-cute between two strangers.

In line for ice cream on the Turkish coast, protagonist Sascha (Victoria Carmen Sonne) is placing her order when Thomas (Thijs Römer), a Dutch tourist, interjects. “You don’t look like vanilla,” he tells her, flirtatiously. Intrigued, she asks which flavour better suits her looks. “Let me see,” he says, taking the opportunity to scan her body up and down. “Strawberry cheesecake.” But that’s even worse than vanilla, and so she fixes it: “Strawberry champagne sorbet.”

Holiday capitalizes on the idea that a young, attractive blonde on vacation might be misread as something closer to a family-friendly dessert than a bolder, flashier choice. This incongruity—between how Sascha seems and how she really is—drives the film’s plot and is responsible for much of its potency. The ice cream scene is clever on Eklöf’s part: Her protagonist knows that she’s up for consumption regardless, and would like at least some say in how she’s to be consumed.

We don’t know anything about Sascha except that she’s the “new girl” of drug lord Michael (Lai Yde) and is here with him in Turkey for his pleasure, both sexual and visual. In return, she gets to suntan, dress up, sample Michael’s stash, and pick out a piece of jewelry—two expensive emeralds that dangle from her ears—to mark her as his own.

Sascha and her fellow Danish villa mates—Michael, his associates, and their respective women (plus one son)—are accustomed to a life wherein violence is a given; a necessary evil to maintain their lavish lifestyles. Hot and cold co-exist everywhere in this world, whether it’s the bright neons adding warmth to their modern, all-white villa; or the women loudly watching cartoons to drown out the screams of an associate being tortured in the next room.

The film’s violence is—as far as viewers can tell—unsimulated, which makes it particularly distressing. This is perhaps truest of a graphic scene in which Sascha is raped by Michael in a single, gruelingly long take. The scene doesn’t invalidate Holiday’s merits, but it does come across as provocation for the sake of it, especially since Michael’s misogyny and capacity for brutality have both been well established by the time it rolls around. Earlier in the film, a comparably long shot has him playing with the limbs of a passed-out Sascha in their bedroom, seemingly deciding whether to assault her. Moving his new girl around like a ragdoll and grabbing at the bulge in his pants, he stares proudly at his reflection in the window. We cut from here to Sascha waking up the next morning, naked and still unaware that Michael had spiked her drink.

Eklöf is a talented filmmaker with an obviously strong vision. What makes the latter scene so effective is that it’s executed similarly to many others in Holiday. We often jump from scene A to scene B without closing certain gaps: How did she get home? What was said? What happened next? Questions remain unanswered throughout, and it’s for this reason that the explicit rape scene feels gratuitous. So much of the film rests on unanswered questions—on what we don’t see—and so to spend several minutes showing us the full assault feels counter to Eklöf’s overall strategy.

What’s perhaps equally troubling is how shy some critics have been to use the word “rape” in their reviews of the film. “Sexual humiliation” is an accurate, if cushioned, way to describe the scene. But reading that Sascha is “made to have sex on her lover’s terms” gave me pause, seeing as that’s more or less the definition of assault. These writers are aware that Holiday’s production and reception might be informed by the #MeToo movement—the hashtag makes an appearance in just about every review of the film, sometimes clumsily—and yet they tiptoe around the word “rape” as if they’re still unsure what constitutes it.

Halfway through Holiday, Sascha sustains a gash around her neck when her scarf is caught in the wheel of her motor scooter. It’s a silly and avoidable accident, but the resulting scar is a gruesome, Bond-villain-like accessory that pairs easily with her emeralds. It makes her seem at one with her villa mates, themselves marred by years of crime. The change in Sascha is immediate: When one of Michael’s associates botches a solo job, the other men torture him to ensure he learns his lesson. While the women and children quickly disperse, moving to a different part of the villa, she lingers.

Sascha’s interest in this world of violence eventually morphs into an ability to enact it herself, and it’s here where Holiday shifts gears entirely. The film’s final act mercilessly forces us to reexamine our assumptions about women and victimhood. We’re reminded that Sascha recoils when Thomas mistakes her for an old-fashioned dessert. She’s not an innocent bystander here, and—as it becomes clearer over time—might be playing a game of her own.