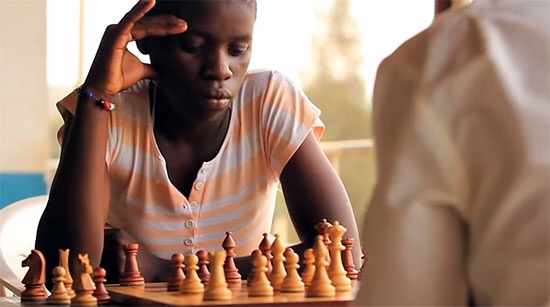 Queen of Katwe is the the newest live-action film from Disney. While Disney’s live-action fare has been steering toward remakes of animated films, their “sports underdog” stories – be it track, football, or hockey – have been a reliable staple. With Katwe, Disney went outside of the box to tell the story of Ugandan chess prodigy Phiona Mutesi. The result is a wonderful film that raises the bar for Disney. It’s an expertly directed, well-acted, and heartwarming crowd pleaser that gives us a different heroine than we are used to seeing from Disney.

The film starts in 2007. Phiona is living with her mother (Lupita Nyong’o) and siblings in Katwe, a slum of Kampala, Uganda. Her father died, leaving her family penniless, so they live in poverty, selling maize on congested roads for shillings. One day, Phiona and her brother happen upon a sports ministry program run by Robert Katende. She’s never been to school and cannot read, but Phiona shows a natural aptitude for chess. She discovers chess throughout five years, develops her talent, braves numerous obstacles, and eventually becomes a Woman Candidate Master and a chess star. The film ends in 2012, when she buys her family a permanent home.

Phiona’s story is one that seemed destined for the big screen – it’s a rags-to-riches success story that cinema loves, but not one I would expect Disney to produce. In the history of Disney sports films, the subjects are usually American (Glory Road, Macfarland USA, Remember the Titans). The exception is Cool Runnnings – and even then, the guy who got them to the Olympics was white. In fact, aside from Remember the Titans, the “coach/mentor” characters are white men. So rather than make a white savior movie, Disney made a film with all Black leads and nary a white person in site – a first for a film under the Disney label.

The “savior” roles in this movie are played by two acclaimed Black actors – David Oyelowo and Lupita Nyong’o. Oyelowo is fantastic as Robert Katende. Robert is a cheeky guy, so Oyelowo gets to show comedic timing he hasn’t gotten to show in recent roles, and he brings wonderful warmth to his mentorship of Phiona. Rather than be the stock coach of a team of ragtag misfits, Robert is someone who came from poverty and truly believes in the children he helps. He’s not out to better himself, he’s out to give the children of Katwe the same chance he received.

Academy Award Winner Lupita Nyong’o turns in another great performance as Phiona’s mother, Nakku Harriet. In other Disney sports movies, Nakku Harriet would have been the stock disapproving parent, but this movie makes her a multi-faceted character rather than an obstacle. Harriet has faced much tragedy in life – the loss of both a husband and a child, and homelessness – and struggles to make a life for her children while living in poverty, so we see why she is so guarded when this opportunity for her child comes up. Harriet does not want to hinder Phiona’s chances, but she does not want to see her daughter exploited. She fears that her daughter will desire things that she cannot provide – or worse, desire a life without her mother. But she is a hard-working woman who ultimately does what she can for her family, and the film makes it very clear that her strength and pride both inspires and drives Phiona.

There is diversity behind the camera as well, which works to the film’s advantage. The film was shot on location in Uganda, so the poverty that we see is real. In less adept hands, the poverty could very easily have been exploitative, portrayed as a constant state of suffering for westerners to look upon with pity. World-renowned director Mira Nair (best known in the U.S. for “Monsoon Wedding”) avoids that, finding beauty and life in all surroundings, be it the bright clothing of people walking by, or the fun of a soccer game. We experience the goings-on of day-to-day life. We see fishing, selling maize on a congested street, dancing, and just walking home. We hear the sounds of traffic, singing, conversation. Katwe isn’t just a backdrop. Nair allows it and its inhabitants to be characters. Katwe exists outside of the lens of western pity.

But the movie’s secret weapon is Phiona herself, played by newcomer Madina Nalwanga. Nalwanga brings a quiet strength and resolve to the part, and also has a great natural swagger, which comes in handy during the chess tournament scenes. Phiona is interesting in the context of Disney, because she has the same desire of many Disney princesses: she wants more out of life, wants to go beyond what society tells her life has in store for her. Phiona watches her older sister Night find boyfriends to care for her financially, and hears people suggest her widowed mother do the same. The film does not make a judgement call on either woman, but Phiona doesn’t want to end up poor like her mother or the girlfriend of a “sugar daddy.”

Phiona isn’t fighting for school pride, national pride, or a prince. She is fighting for her ability to change her station in life. Throughout the film, there’s the theme of chess being a way to solve your problems, to change your situation, and that is what Phiona wants to do in real life. It’s why she is inspired by chess. When she loses a match, she cries – not because she lost but because she fears she will never go beyond selling maize. For her, winning is about life itself, being seen for her skills and being able to advance. And Nalwanga, only 15 at the time of filming, conveys these thoughts and fears with as little as a look when she’s moving a chess piece. She’s a great heroine not just for Disney, but for anybody – she’s smart, resilient, and she triumphs in the face of adversity. When you watch the film, you cheer for her.

Queen of Katwe is the kind of film we need right now. It’s a film about an African country that is not about tragedy, but hope and resilience. It’s a film about a young woman valued for her brains and skills over her looks. This is a movie that defies so many cinematic tropes, and I am so glad Disney produced it. Disney is one of the biggest producers of entertainment on the planet, with films seen all over the world. I hope this, along with the upcoming Moana, signals a change in what Disney produces – not just Eurocentric princesses and scrappy Middle-American underdogs with the occasional story of a non-white character – but consistently producing stories about people from all over the globe.

We may not see Phiona on any Disney princess merchandise, but she’s a queen that we can all root for.