Children of Men (2006) is set in a dystopian near-future Britain.
Humanity has become completely infertile; the movie opens on a scene
of public mourning over the death of the youngest person on earth, who
is 18 years old. In the 18 years since the last child was born, the
world has torn itself apart through (presumably nuclear) war. 2027
Britain features a harsh, fascist landscape, in which men and women
alike are subject to mandatory fertility checks, goods and food are
rationed (with some stark divisions among the classes), the elderly
are encouraged to commit suicide through a program known as Quietus,
and immigrants and refugees – known in the film as “fugees” – are
violently caged and herded into camps for deportation. Our lead, Theo
(Clive Owen), is roped into a plot by his ex-wife Julian (Julianne
Moore) to escort a young woman, Kee (Clare-Hope Ashitey) out of the
country and into the waiting arms of the Human Project. We learn
quickly that Kee is pregnant, and she and her unborn baby are the
symbols of hope for all of humanity.

Carleen Tibbetts and Amanda Rodriguez provide good further synopses of
the film, and Rodriguez especially critiques the film’s problematic
treatment of women. However, in the interest of muddying the waters, I
wanted to write about some aspects of gender that I felt were
overlooked in these analyses.

The first concerns Julian. Almost immediately upon her introduction as
Theo’s ex-wife, we can see he is still in love with her. She is killed
early in the movie by what, at first, appears to be (unexplained)
“uncivilized” folks living in the woods. Initially, I thought this
would be yet another Fridged Woman moment, wherein she dies to serve
Theo’s growth as a character. We learn later that she was assassinated
by her own rebel group, the Fishes, so that second-in-command Luke
(Chiwetel Ejiofor) could take control. We also learn that she and Theo
met and fell in love at activist meetings. In both cases, what we know
about Julian is that she is a politically powerful, activist woman –
she was loved for this, and she was killed for it. While we ought to
be critical of women dying in or especially for “men’s stories,” we
should not overlook this, especially in a story that places every
woman with a speaking role firmly on Kee’s side.

The only villains in this story – those who would control Kee’s body
and control bodily autonomy altogether, those who hurt these women,
the poor, the elderly, and the refugees – are all men. Many of the
women are indeed killed; they die for the cause, for Kee, for her
baby, and for all they represent. The disposability of women’s bodies
in film is deeply troubling, but in this film, we should also take
note of what it means not only for men to be the ones who would
exploit Kee and her pregnancy and for women to be the ones to
recognize Kee’s value and humanity, but also what it means for white
women and others to risk their lives for the life of a Black immigrant
woman.

Theo’s role, too, comes under some necessary criticism – what does the
film say when it puts a white man as the lead in a story about a Black
woman’s pregnancy? What does it mean if he is the one who saves her?
We should be wary of stories of men as women’s saviors and of white
people as the saviors of people of color and immigrants, but if we
take this portrayal as a comment on the world we live in, we can also
interpret Theo as doing ally work. In this case, Theo’s whiteness and
maleness, combined with his citizenship status and family connection
to wealth, carry with them the relative safety Kee needs to complete
her journey. He uses all his resources to help her, his life included,
because he values not only what she represents, but who she is as a
person – notably, Theo and Kee share several small scenes where they
laugh together and enjoy one another’s company in an otherwise tense
movie. And in the end, Theo may save Kee, but it is Kee and her baby
who will save humanity. Viewed this way, Theo is only the vehicle Kee
needs to get to her destination.

Most importantly, I think, is what it means for Kee herself, and her
daughter Dylan, to be the saviors of humanity. The movie both plays
the religious angle straight and pokes fun at it. As Rodriguez notes,
in one scene, we are treated to the sight of Kee’s massive pregnant
belly as she stands in a barn, a heavy-handed visual reference to the
Virgin Mary. 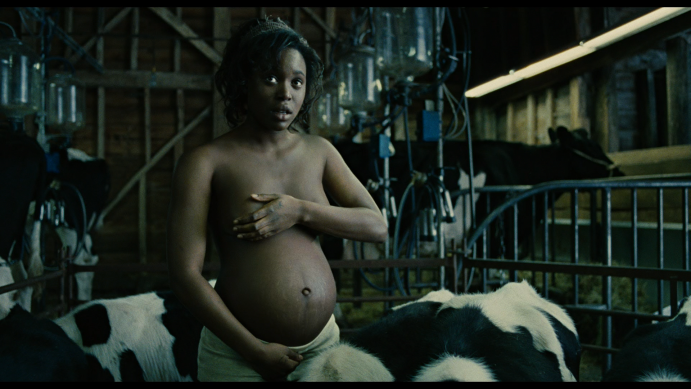 Kee comments on the cows around, brutalized, bred and held captive by
the Fishes, before she reveals her pregnancy to Theo.

Later, when Theo asks Kee, “How?” she tells him she’s a virgin, then
laughs uproariously at his expression and corrects him: of course
she’s had sex, and she doesn’t know who the father is. There is no
judgment about Kee’s admission of multiple sexual partners; she neatly
lampshades and then defies the Madonna/whore dichotomy in a single
joke. Throughout the movie, Kee’s baby is referred to as a boy, until
her birth, where it is revealed that Dylan is a girl. This is less
straightforward than the other religious references, but one could
assume the Fishes thought Kee’s baby boy would be Jesus come again.
And maybe she is – that’s another interpretation for another time –
but if so, Jesus isn’t going to be a man this time around.

Stories about the pregnant bodies of Black women and immigrant women
can be fraught with problematic politics; both of these categories of
woman are often reviled in our society for their stereotypically great
fertility and supposed hypersexuality, and the threats these pose for
white supremacy and nationalism. Yet again, if we think of this movie
as flipping the script, we should also ask what it means that a Black
immigrant woman’s fecundity is the saving grace of all of humanity. We
should ask what it means when the movie highlights, over and over,
that Kee’s child is a girl. For all that we can critique the
problematic things about this film, I think it is deeply important
that two immigrant women of color – Kee and Dylan, together – are the
most valuable people in the world. 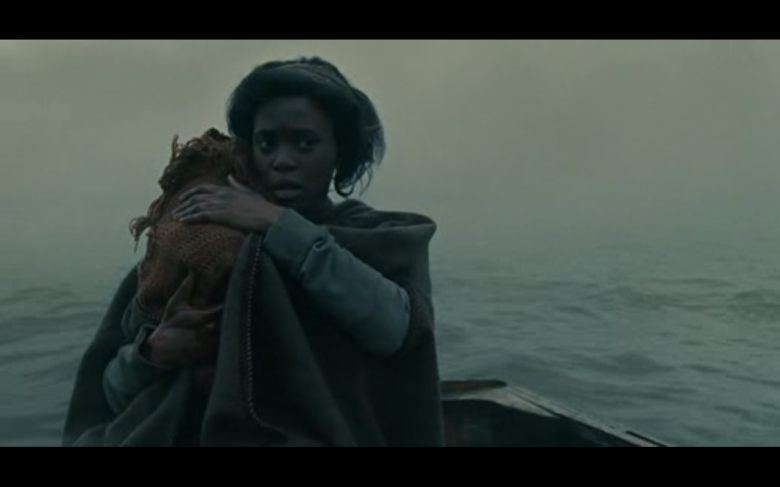